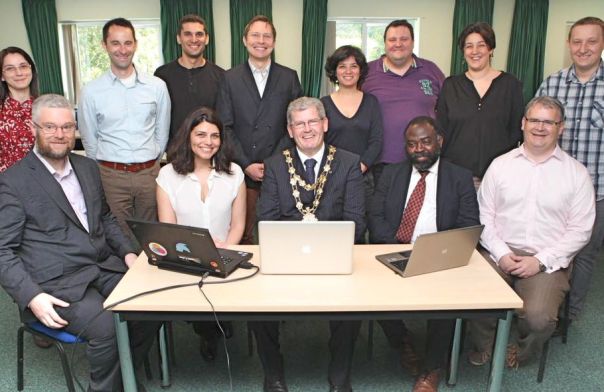 The future of journalism in Europe was examined at an international two day event held at the Insight Centre for Data Analytics at NUI Galway as part of a European Union Horizon 2020 Programme for Research and Innovation known as ‘Your Data Stories’.
The event was officially opened by the Mayor of Galway, Councillor Frank Fahy, and hosted by the eGovernment unit of Insight.
Delegates included representatives from the Irish government’sDepartment of Public Expenditure and Reform, theNetherlands-based European Journalism Centre, the German broadcaster Deutsche Welle, the Belgium software company Tenforce, the Athens Technology Centre, the Greek Free Open Source Software Society(GFOSS) and the Demokritos National Centre for Scientific Research.
The purpose of the ‘Your Data Stories’ project is to develop next generation data journalism tools using public open data to provide media and consultancy organisations with stories as they happen.
According to organiser Niall Ó Brolcháin from Insight, “The next generation of journalists will come into work on a Monday morning to find a set of potential stories waiting in their inbox, complete with statistical and background information derived from multiple sources”.
“The data that will be used to create such stories could comprise health information, transport data, financial data, environmental data, agricultural data and other data sources combined with statistical data. Any anomalies in the data will automatically trigger a red flag, for example incidents of air pollution, major traffic snarl ups or the outbreak of an epidemic”.